4 Tips to Financially Prepare for the Presidential Election 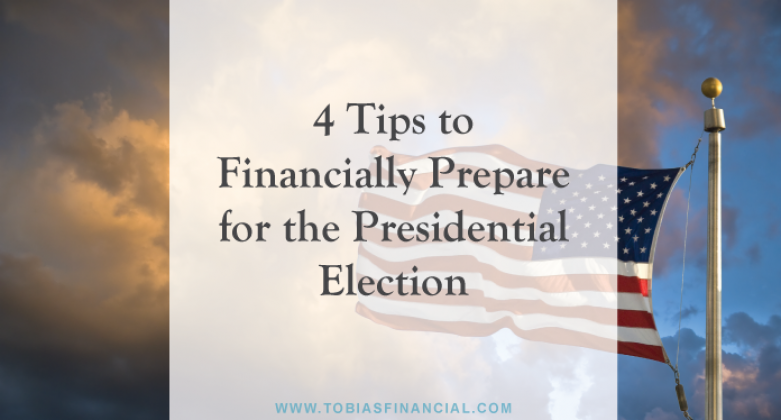 Will the upcoming election affect your finances?

With the 2016 election right around the corner it’s no wonder that many people are questioning whether it will affect their financial decisions. Here at Tobias Financial Advisors I’ve seen several elections come and go and have watched how the economy has shifted over time. I’ve noticed, time and time again that an election rarely has as big an impact on the economy as people initially believe it will. When it comes to the election, I tell our clients it’s important to stay calm and not overreact. I believe “emotions can be an investor’s worst enemy.” While some are doing their research and examining trends, many are getting swept up in the emotional rollercoaster of this particular election. It’s completely normal to have some fear of the unknown during a time of change and transition, but with fourteen years experience in the industry,  I have seen that with careful planning and attentiveness, there is really no need to get spun up.

Predictions about presidential elections and the stock market often focus on which party or candidate will be “better for the market” over the long run. Exhibit 1 shows the growth of one dollar invested in the S&P 500 Index over nine decades and 15 presidencies (from Coolidge to Obama). This data does not suggest an obvious pattern of long-term stock market performance based upon which party holds the Oval Office. The key takeaway here is that over the long-run, the market has provided substantial returns regardless of who controlled the executive branch.

Past performance is not a guarantee of future results. Indices are not available for direct investment; therefore, their performance does not reflect the expenses associated with the management of an actual portfolio. The S&P data is provided by Standard & Poor’s Index Services Group.

Keep calm: It’s only one election

It is important to keep in mind that one election will not revolutionize the entire economy. With several elections under my belt I’ve seen a historical pattern of concern over an upcoming election, only to realize that many of those concerns were unfounded and were based more on fear of the unknown rather than actual data.  One of our clients recently divulged that if a certain candidate were to get elected, they would liquidate their portfolios and pull completely out of the market. While I understand that these concerns are coming from a place of uncertainty, ultimately we helped the client realize that it would be unwise to make such a rash decision. While the role of president is a very important one to our country, the inhabitant of 1600 Pennsylvania Avenue cannot completely change the entire landscape of the economy. No matter who ends up taking office in January, there will be checks and balances in place to keep things moving in a somewhat “business as usual” fashion after the election. It’s a good idea to monitor the situation, but remember that tax laws will take time to change. I suggest looking at the current state of important economic factors such as unemployment and the stock market and I think you’ll find that come inauguration day, not much will change. When you look back throughout history it becomes clear that change takes time. Whenever we’ve experienced big shifts in the marketplace it’s generally happened slowly and this election should be no different.

What is causing the panic?

Part of what is causing the current state of unrest is the difference in climate between this election and those in the past. Prior to 2008, my clients rarely wanted to speak about politics.  Now, it’s happening at almost every single meeting. I have clients that are both Conservative and Liberal, but they all seem to share the same sentiment that if the other candidate wins it will spell doomsday for the economy. This is not something I’ve experienced before, but it does make sense in light of recent changes. The evolution of our society has led more people to be comfortable expressing an opinion and approaching topics that were previously considered taboo. This openness can be a great thing in certain circumstances, but in some ways this election seems to be driven more by hype than by facts. Many people believe we are choosing between two evils, so that it is not so much a matter of one candidate that you like up against one you do not. Instead, many people are viewing their decision to vote as a matter of choosing who will do the least amount of damage. As we move into the future we may continue to see more and more elections like this. What’s important is that we keep in mind the lessons we’ve learned from the past.

Separate the hype from the realism

We live in a day and age in which information is so prevalent, we rarely find ourselves lacking for data. When it comes to deciding what information to react to and what to ignore, it’s important to remember this key fact: You must separate the hype from reality if you are going to make wise financial decisions. As noted before,  we have clients that have proposed eliminating their equity exposure in the event that their least favorite candidate takes office. No matter who wins the election, selling off all your investable assets will not be the answer to your concerns. Keeping calm, making rational decisions, and operating from knowledge instead of fear will go a long way. It’s also important to take statistics with a grain of salt. When looking at past statistics, it’s not enough to just examine the economy in light of who the current president was. Think about what else was going on during that time. What was the marketplace like? Just because two things are correlated does not mean they are necessarily connected.

As we approach the final days of the election keep in mind that no matter what the outcome there is no need to make any rash decisions. Keep calm, stay focused on your financial goals and know that there are many factors that go into the state of economy beyond the current president.

Matthew D. Saneholtz, CFA, CFP®, EA joined Tobias Financial Advisors over ten years ago. Currently, Matthew serves as a Senior Financial Advisor, providing financial planning and investment advisory to our broad client base. Matthew is an active player of the financial industry, holding membership at The National Association of Personal Financial Advisors, the CFA Institute, and the CFA Society of South Florida.